Tens of people - some civilians - have been killed or injured in Khalifa Haftar's offensive on Tripoli, which has entered its eighth day with fighting intensifying in southern Tripoli areas.

After fierce battles in Yarmouk camp in southern Tripoli, clam has descended on the frontline and in the area of Khalit Al-Furjan as the Libyan Army forces under the Presidential Council's command kept them under control since Wednesday.

Wadi Rabea frontline saw more violent clashes on Thursday as Libyan Army's Air Force jets hit Haftar's forces locations in the area while they in return tried to use their aircraft in a retaliatory air raid, but targeted their own forces mistakingly.

In Ain Zara, also in southern Tripoli, clashes were still ongoing on Thursday with forces under the Presidential Council's command taking control of the area with sources from the forces reporting the surrendering of 8th Brigade of Ajdabiya forces from Haftar's self-styled army and though it was a false surrendering at the beginning trying to make an ambush but later they were forced into putting down their arms.

Sawani district saw also violent clashes as Haftar's forces were in control of it but later the Mobile National Force and Fursan Janzour Brigade of the Presidential Council's forces seized it and destroyed several armored vehicles for Haftar's forces.

Haftar's forces later shelled residential areas and houses of civilians in Sawani, killing several of them and leaving huge damage in properties.

Meanwhile, the spokesman for Haftar's forces, Ahmed Al-Mismari, said their military prosecutor issued arrest warrants of the Head and members of the Presidential Council, Libya's Muft Al-Sadiq Al-Gharyani, and other civilian and military figures for terrorism charges. 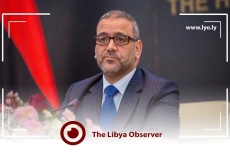